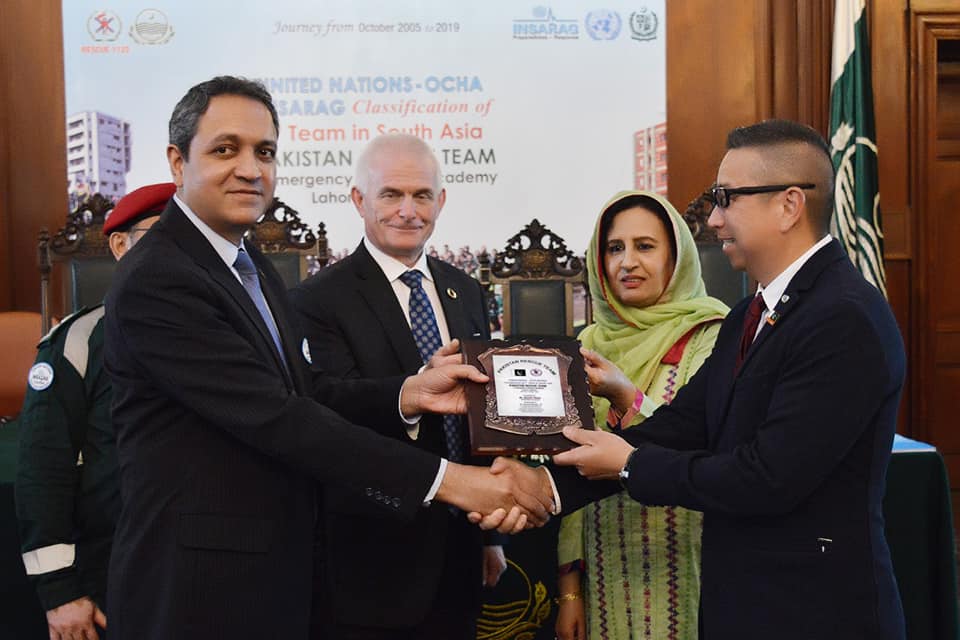 LAHORE: The Punjab Emergency Service, Rescue 1122, has officially been certified by the International Search and Rescue Advisory Group (INSARAG), an organisation supervised by the United Nations (UN) Office for the Coordination of Humanitarian Affairs (OCHA).

The official announcement was made by INSARAG Secretariat Winston Chang during a ceremony at the Governor House on Thursday. By passing this certification, the Pakistan Rescue Team (Rescue 1122) is now a UN certified search and rescue team that can be called in to respond to earthquakes around the world.

At the ceremony, the foreign minister and the governor congratulated the team and said that Rescue 1122 had added yet another feather to their cap.

“This achievement is a result of the hard work and dedication of Rescue 1122,” said the foreign minister.

Punjab Governor Chaudhry Muhammad Sarwar maintained that he has witnessed the helplessness of the people after the 2005 earthquake in Pakistan. During that time, teams from the United Kingdom (UK) and other parts of the world arrived in the country to assist in the rescue operation as Pakistan did not possess a trained emergency response mechanism, he said.

Punjab Emergency Service Director General Dr Rizwan Naseer stated that the emergency services academy, established by Rescue 1122 in Lahore, has been selected as the place for stationing the Pakistan Rescue Team due to its central location and undeniable role in training emergency staff.

“The team will be able to train others from different provinces as well as those from neighbouring countries,” he maintained.

Meanwhile, in a statement the UK International Development Secretary of State Alok Sharma also offered his congratulations on completing this feat. “I am a proud expert of INSARAG which has mentored many Pakistani colleagues. Sharing British expertise has made Pakistan better equipped to respond to natural disasters,” he said.